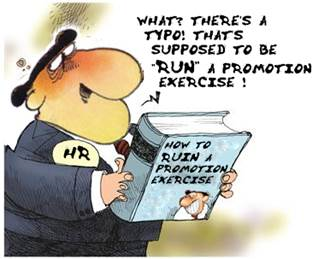 … And prospects are not bright for the coming year! A brief summary of facts to start.

2015: the heist of the century for some grades…

Nearly 70 % of rapid promotions (yes, you read that right) for grades AD9 and AD11 with consequent periods spent in those grades almost equivalent to those of grade AD5. In contrast, over 30 % of colleagues promoted to grade AD10 waited 5 years before a deserved promotion (as a reminder, Staff Regulations provide a 4-year period for grades AD9/10/11, while seniority for grade AD5 is less than 3 years). To this can be added more than 100 appeals from those AD10…

How did it happen? Have Directors general made reckless proposals, favoured certain grades and disadvantaged others? No … DG HR has achieved this all alone, by distributing the promotion quotas against all common sense, without any consideration of the period spent by officials in their grade.. Soon it will proudly present its sound management of careers and resources to Parliament … who will see nothing.

But the losers are not only found among the grades…

An intentionally hidden difference in treatment between DGs.

The comparative merits of officials eligible for promotion should, in theory, ensure equitable treatment between officials of the same grade, re­gardless of their Directorate General. In fact, this is far from the case: not all DGs are facing the same challenges. R&D is now able to provide you a table that details these inequalities. 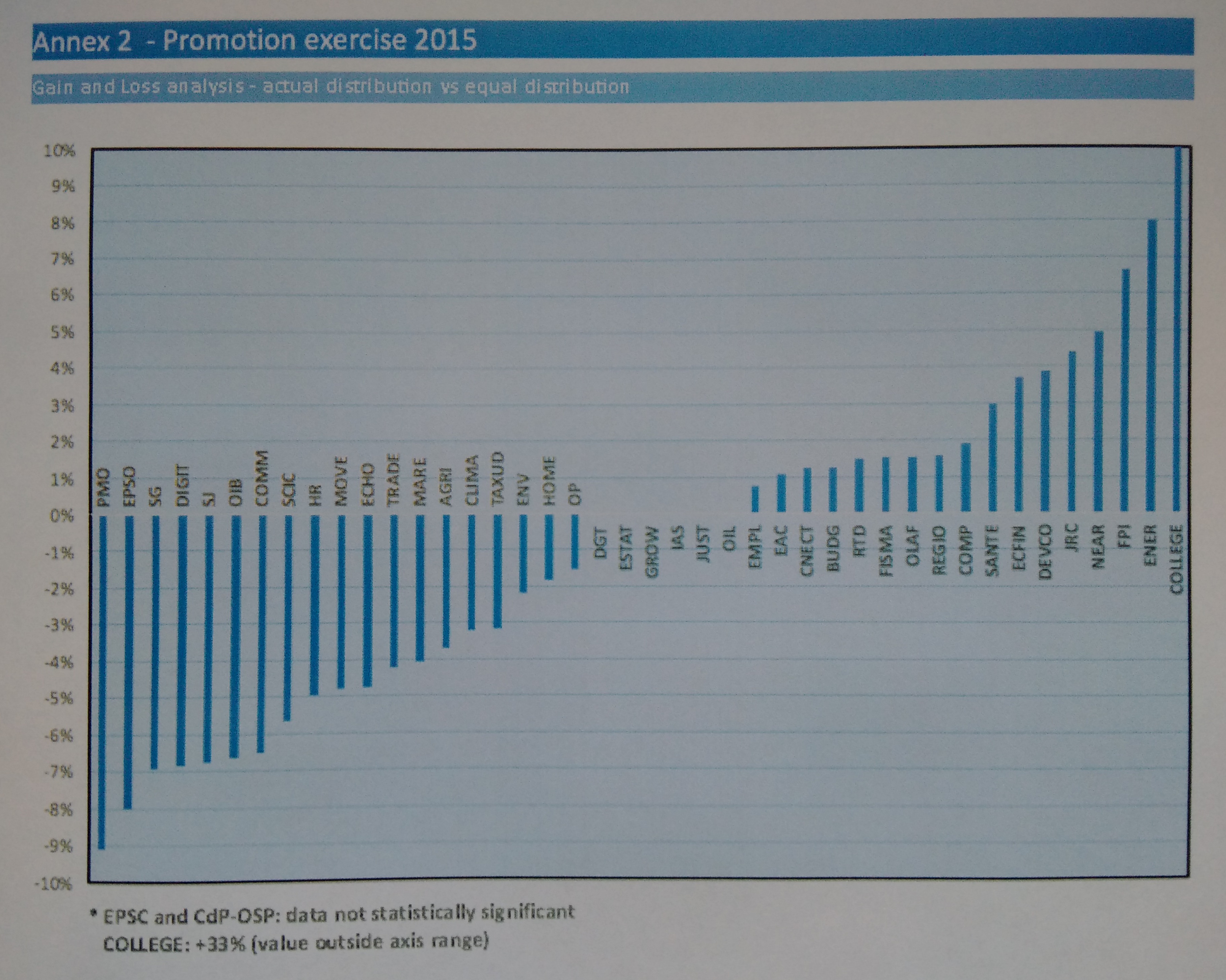 DG HR has so far managed to compartmentalise information about quotas distributed to DGs, thereby preventing comparisons that could raise awkward questions. We understand why, after reading this chart. What justification can there be  that the Secretariat General, a pillar of the ac­tion of the Juncker Commission, receives 15 %  promotions less than DG ENER ( of which we recognize of course the merit) compared to a fair distribution? Are colleagues of the SG (and those of the PMO, EPSO, etc. …) 40 % less efficient than our colleagues in the cabinets, thus explai­ning these glaring differences? R&D has unfortunately never received any reply from DG HR about it…

R&D has in recent years repeatedly denounced (see links: 2015, 2015, 2014) the dysfunctions of the promotion exercise which is more like a game of chance than a real comparison of merits across the Commission: we still remember the episode “TAXUD” (link), where a grade received so many quotas that the DG in question had been obliged to propose almost all colleagues who hadn’t not reached 2 years seniority in the grade for promotion… DG HR has always downplayed these phenomena, hiding behind a “salami slicing” of the exercise that, according to DG HR, makes any improvement impossible.

Yet improvements are possible and R&D had, in particular, proposed to:

1- Apply a fair method for distribution of promotion quotas between DG, taking into account the profiles of seniority of colleagues in the grade. This will ensure that opportunities for normal / rapid promotions between DGs are similar.

2- Limit the percentage of rapid promotion to the average recorded across the Commission in recent exercises, in order to avoid a differentiated interpretation of criteria for comparing the merits (link).

3- Ensure a joint prior verification by DG HR and staff representation, of DG intentions of promotion proposals before the formal publication of the latter. Indeed, in the absence of this verification at an early stage of the proceedings, it is problematic to imagine that the Promotion Com­mittees / the appointing authority may, following a subsequent comparison of the merits, formally withdraw colleagues proposed for promotion by their DG.

4- Strengthen the role, capacity and powers of the Promotion Committees.

To these proposals must be added a recurring point made by R&D (and by the Promotion Committees): compliance with the five-year promotion rates as listed in Annex IB of the Staff Regulations. Indeed, as R&D had always defended, case law has highlighted serious errors in the appli­cation of these rates since 2005, confirming that it is not a mere question of ceilings but actually of binding guarantees to ensure the equivalence of careers. In particular, the Commission was condemned on this in the “Anagnostu Case”, for maladministration (link). No less than 600 promo­tions were lost because of these mistakes. R&D has already requested that the implementation of the Court’s decision is extended to all grades which are in a similar situation.

Last October, within the framework of the AD Promotion Committee, a small working group had been set up to study the measures to be imple­mented to try to correct the anomalies regarding the non-compliance with multiplier rates of Annex IB and the considerable deficit of promotions, as well as the lack of clarity in the assessment criteria for promotion decisions, in particular regarding the level of responsibility, the erratic results of the formula used to calculate promotion quotas, the uncontrolled proliferation of fast-track promotions, etc.

Unfortunately, despite the efforts of the staff representatives, no concrete results have been achieved so far, which is completely unacceptable, because, in these conditions, the anomalies will be repeated identically for 2016 exercise.

The 2016 promotion exercise was launched on Monday and we fear that if the problems raised above are, once again, not corrected, the true recognition of the merits of each one advocated by Vice President K. Georgieva will become a new lottery..

R&D is committed to:

Tribute to the victims of the attacks