R&D organizes the first edition of the European Awards:

“Everything is just fine, don’t worry, be happy!”

R&D has always given priority to the voice of the staff both in its actions and in its decision-making. For this reason, we have always taken into account the results from the Staff Survey for the elaboration of our proposals as well as during the negotiations.

This information was very valuable for our analytical work. It allowed us to meet your expectations and worries about your daily professional life.

Recall of the facts

For a long time the Staff Survey has been nothing but a painful makeup workshop!

We have always denounced the administration’s laxity in organising staff satisfaction surveys in a purely bureaucratic and self-satisfied approach. Considerable cosmetic efforts were made to embellish the presentation of the most critical results. Worse still, no action was foreseen following the conclusions of the various reports, so that nothing changes and the routine continues as if nothing had happened.

Thanks to the intervention of Ms Georgieva, for the first time, efforts were made to ensure that the results of this exercise are finally taken seriously and that trans­parency is finally ensured.

In fact, during the 2016 exercise, Ms Georgieva asked each DG and Service to draw conclusions from the assessments made by the colleagues assigned to them. Thus, she requested that the analyses be taken into account and discussed in every directorate and unit at ad hoc meetings with colleagues.

Ms Georgieva having left the institution, everything starts again as if nothing had happened

Ms Georgieva having left the institution, DG HR has naturally and without delay resumed its good old habits. The action plans have become purely formal exercises, which you have already figured out as seen from this Staff Survey. And services realized that old practices were resurfacing.

In addition, Ms Georgieva wanted to use the results from the Staff Survey to launch a periodic 360 ° assessment of management so that staff could work in the best conditions. However, following her departure this project has been forgotten!

Communication by DG HR, aka “Sales Force”, of the results from the 2018 Staff Survey organized by itself

On the one hand, concerning the management of the communication of the results from the Staff Survey we share in all points the critical analysis included in the communica­tion of our confreres of Union Syndicale.

On the other hand, many of you have expressed your disgust at the campaign that DG HR has just launched to “sell” the results from the 2018 satisfaction survey by using a very aggressive sales strategy.

Provide complete results at the institution level? There is no question !

Don’t fool yourself: it is not even a question of providing the complete results in relation to all the questions asked: “Too much transparency can be confusing” will undoubtedly tell us DG HR!

The results by DG? A clearance sale on demand!

Don’t fool yourself: it is not a question of providing all the results by DG. The results by DG will be “sold” by decentralized “sales offices” using videos and documents more or less well elaborated. 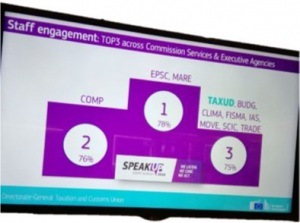 As you can see, the positive results about staff engagement are ostentatiously displayed by the DG concerned, while the DG with the wrong score take care to hide them carefully.

For the sake of transparency, R&D informs you about DG with the worst “Staff Engagement” index, namely PMO and EACEA.

Results by Directorate? The “sale” is strictly prohibited!

Don’t fool yourself: within a DG there is even less question of disseminating the results by direction while they were nevertheless forwarded by DG HR to Directors-General and Business Correspondents. These results by directorate have quickly become real tools of power reserved for Directors-General who can use them in their discussions with the concerned directors. We have heard that directors have even been threatened with the distribution to staff of the not very eulogistic results concerning them.

BRAVO to DG DEVCO which provides a complete information about the results also by directorate!

We would like to congratulate DG DEVCO for demonstrating transparency by publishing the full report (read) on the results from the Staff Survey at the level of the whole DG and for being to date the only DG that has published the results also by directorate.

In the meantime, the other DG are doing their petty shopping and choosing the best results to show off, by riding the wave … and engaging in the pa­rody of “La vie en rose”.

Indeed, the few reports published on the intranets of the other DG are simply “statistics” and include only the data that those DG wanted to show, without displaying the others, for which they have demonstrated the greatest discretion. And the few data they wanted to show were cut off from an essential value, i.e., its analysis.

And in order to see “La vie en rose”, the results are sometimes compared with those of the rest of the Commission, sometimes with those obtained by the DG in the past, natu­rally neglecting in all cases to mention the results that displease.

Under these conditions, R&D organizes the first edition of the European Awards: “Everything is just fine, don’t worry, be happy!”

Faithful to our constructive approach aimed at enhancing the excellence of senior management members of our institution, not being insensitive to the exploits of certain self-satisfaction exercises to which some services are engaged, R&D has decided to organize the first edition of the “European Awards: “Everything is just fine, don’t worry, be hap­py!”

The prize will be awarded by a committee of specialists “in propaganda” who will be responsible for rewarding the maximum gap that a DG has been able to pro­duce between the reality of the negative results highlighted by the colleagues and their so reassuring presentation!

The winner will be officially named the best “James” having reassured the Marquise that “everything is fine, everything is just fine, don’t worry, be happy!”

On the basis of very many reactions that have been addressed to us, we are pleased to announce the winner of the first stage of this awards, namely the new Director of EACEA, the best “James” responsible, despite all, to reassure the Marquise … whereas, given the dysfunctions found within this Agency, she had good reason to be very wor­ried!

Indeed, the results from the 2018 Staff Survey concerning the EACEA (read) are in several aspects the WORST of all services of the institution (sic!) and largely be­low the results of all the other executive agencies! This without forgetting the “pressure” exerted during the launch of the 2018 Staff Survey for the results of the EACEA to be positive in the desperate attempt to try to counter the disastrous findings of ongoing audits. Several colleagues contacted us seeking reassurance that it would be impossible to trace and retaliate the participants in the survey.

But that’s not all: the results are downright devastating as regards the assessment of the senior management of this Agency with about 90% (sic!) of critical res­ponses, almost 40% below the Commission average! Simply never seen!

To appreciate the results obtained by this Agency, we must not forget that as we indicated in our communications (read R&D is listening to the staff of EACEA, Note to the at­tention of Mr Carlini) EACEA colleagues told us about the “pressure” exerted during the launch of the 2018 Staff Survey for the results to be positive in the desperate attempt to try to counter the disastrous findings of the current audits. Several colleagues contacted us seeking reassurance that it would be impossible to trace and retaliate the authors of critical responses in the Staff Survey!

In these circumstances, we would have expected the new Director of EACEA to ensure the utmost transparency by publishing the complete results, to begin his communication with the assurance that the message had been well understood, that these disastrous appreciations would be duly taken into account and that urgent and far-reaching changes would be put in place without further delay.

None of this: the new Director of EACEA has just published a small page summarizing the results, i.e., the most succinct communication compared to all the other services of our institution.

None of this: the new Director of the EACEA has just engaged in the surrealist exploit to produce a rather reassuring communication by being limited to making a vague refe­rence to the difficulties encountered and the “challenges” for the future without a real analysis of the so negative indices, without any reference to the disastrous assessment of management and quite naturally without indicating that any consequence will be drawn …

While very much appreciating the positive results concerning the motivation that the EACEA colleagues still keep, he fails to recognize that this is almost miraculous in view of the more than painful conditions in which the staff of this Agency were called to work for too long!

Given that only 10 % of the EACEA staff answered that they believe that the changes are well managed within the EACEA … WORST result to our knowledge within the whole institution … some have told us that the goal pursued by this “no communication” would be to reach 0 % of positive responses in the next Staff Survey!

On the other hand, in these circumstances, it is perfectly understandable that EACEA colleagues have massively expressed to us their disgust and the conviction that the fact of having dared, despite the pressures, to respond in soul and conscience to the Staff Survey has not been useful, that nothing will change and that everything will go on as usual with the same actors.

Given the above, we ask Commissioner Oettinger to not lend himself any longer to this “masquerade-communication” that has already lasted too long and whose apotheosis was the one organized at EACEA, and to instruct DG HR that all results of the 2018 Staff Survey be communicated without delay to both staff and their representatives.

This should be done in relation to ALL the questions, for ALL DG and for ALL directorates within each DG.

And by using a standard format, the same as that used by DG DEVCO, thus ending this mockery of beauty contest where everyone communicates what suits him.

Threats to our pensions