Note to the attention of Mr Jean-claude Juncker

President of the European Commission

Commission Decision of last 21 December to hand a reprimand to former Vice-President Kroes for the lack of diligence she demonstrated by failing to declare the income received for 2015 in the early 2016 declaration, while still accepting to receive the transitional allowance

15 November 2016: Reform of the Code of Conduct  applicable to members and former members of the Commission

23 September 2016: « Bahamas Papers » and articles in the European press about the situation of the former Vice Presidente Neeli Kroes 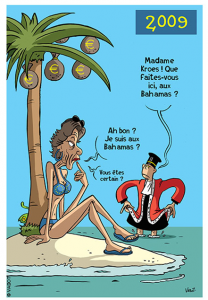 From the outset of the Barroso and Kroes cases, R&D firmly supported the European Ombudsman’s very clear positions and drew your attention to the need and urgency to ensure rapid, effective and rigorous management of these cases which have provoked violent reactions, and have seriously undermined the credibility of our institution (Barroso-Kroes cases).

At the same time, and in full respect of the autonomy of the colleagues collective who initiated it, R&D immediately supported the petition “not in our name” which collected over 153,000 signatures.

We deplored the lethargic attitude of our institution, which gave the impression of fostering the illusion that, through its inadequate inaction and reactions, these cases would fade away, despite all the demands of the staff and their representatives and political reactions within all member states.

Subsequently, we welcomed the first reactions and actions implemented. Nevertheless, they remain inadequate, insufficient and incomplete to cope with the seriousness of the credibility crisis that has hit our institution.

These measures continue to appear to us as way below the mission of the “last chance Commission” which is first of all, as you confirmed, to “regain the confidence of citizens”.

In particular, it is appreciated that, after having claimed to the exemplary nature of its character, at your instigation, the College finally decided to reform the code of conduct applicable to members and former members of the Commission.

It must be remembered that documents published at the end of September by several European media, on the “Bahamas Leaks”, revealed that Mrs Kroes has remained director of Mint Holdings Ltd., an offshore company in the Bahamas, between 2000 and 2009.

Between 2004 and 2009 Mrs Kroes held the post of Competition Commissioner and, as a result, the EU Code of Conduct forbade her to engage in “any other occupation, whether gainful or not’”.

Moreover, at the beginning of their mandates, the Commissioners must notify in a public register all activities carried out during the previous ten years. However, at the time of her assumption of office, Mrs Kroes had failed to declare her directorship  of Mint Holdings.

It was noted that the case seemed all the more sensitive since Mint Holdings was intended to buy back large-scale assets in the energy sector, whereas Mrs Kroes was defending in Brussels, on behalf of the Commission, the liberalization of the gas market.

In response to the more than virulent reactions to the revelations of the “Bahamas Leaks”, Mrs Kroes explained that she ” she did not know she was still listed as holding the unpaid post.”

These remarks immediately aroused very sharp reactions stressing the fact that it was not credible that Mrs. Kroes “could not know the social mandates that she exercised and that it was simply laughable that, unbeknown to oneself, one can be director of a company that is useless at the other side of the world in a tax haven” …”

Mrs Kroes and the “Bahamas Leaks” … guilty but not sanctioned

By its decision of last 21 December, the Commission finally acknowledges Mrs Kroes’ failings, which were, moreover, indisputable.

However, even if, following the advice of the Ad Hoc Ethics Committee, the Commission acknowledges that Mrs Kroes is guilty of breaching the Code of Good Conduct, it has decided not to sanction her because it seems to accept her version according to which she would have been Director of Mint Holdings … unbeknown to herself…/without her informed knowledge…

Allow me to observe that Commission’s decision is, to say the least, surprising, that it seems obviously inadequate and is difficult to understand.

This is all the more the case as, despite several questions raised about that at the Commission’s daily press conference of 22 December and a written reminder from AFP, the spokesperson’s service simply limited itself to confirm that “the Commission had all the information it needed to decide” and refused to say whether it had investigated the Company or relied solely on the advice of the Ad Hoc Ethics Committee who appears to have been satisfied with Mrs Kroes’ statements.

The same questions concerning the absence of any verification of the remarks and documents transmitted by the former members of the college had been made concerning the opinion given by the Ad Hoc Ethics Committee on the Barroso case (note to the College—15 November 2016).

In this regard, we are waiting to hear what action the Commission will take on the matter.

Again, it is appreciable that the Commission decided to disclose its decision “given that the facts concerning Mrs. Kroes have been widely taken up in the press”.

Consequently, it is not surprising that the first reactions were very critical, pointing to the absolutely inadequate nature of the decisions adopted and the fact that they were “made public on the sly, on the eve of the end of year holidays, in the middle of a dozen other announcements “.

It should also be noted that MEP Pascal Durand, rapporteur for the text adopted by the European Parliament on 1 December 2016 on the declarations of interest of the members of the Commission (2016/2080 (INI) and the motion adopted by the EP on the freezing of allowances … ( EP Resolution of 26 October 2016… point 69 2016/2047 (BUDG)) immediately described the decision as ” an insulting mockery” by denouncing that the Commissioners “do not realize to what extent they are damaging  the image of Europe”.

Mrs Kroes is handed a reprimand for failing to report her income for 2015 to the Commission, while still agreeing to receive her transitional allowance

Having read your decision, we have learned about another case related to Mrs Kroes’ income tax return for 2015.

In addition to her term / mandate for with Mint Holdings, it appears that Mrs Kroes also failed to report her income for 2015 to the Commission, while agreeing to receive the transitional allowance received by the former Commissioners during the three years after they leave office.

Probably not being able to claim, again, to have received this income unbeknown to herself /without her informed knowledge, it was only a few days after the revelations of the “Bahamas Leaks” that Mrs Kroes finally informed the PMO of her incomefor 2015 . This enabled the Commission to recover the amount paid to her in respect of the transitional allowance and to which she was not entitled.

Under  these circumstances your decision to follow once again the advice of the Ad Hoc Ethics Committee and to limit the sanction to a mere blame does not seem adequate to the seriousness of the breach found.

It must again be emphasized that the absence of any sanction relating to her role in the context of the facts revealed by the Bahamas Leaks and the mere blame inflicted to Mrs Kroes for failing to declare her income for 2015, can in no way stand comparison with the sanctions which would be imposed by the Appointing Authority on similar acts to any staff member.

Not to mention that staff does not benefit from the unlimited benevolence of the Ad Hoc Ethics Committee. From the first suspicion of violation of the rules in force, they are subjected to heavy and arduous investigations by OLAF and / or IDOC.

Thus, in addition to the critical reactions mentioned above, your decision will not fail to amplify the feeling of demotivation and frustration of your staff which through the aforementioned petition had appealed to you and your sensitivity to ensure that such cases are managed strictly in order to restore the image and credibility of our institution, which we are all proud to serve.

The importance of reforming the existing procedures

Again it is clear that the existing procedures for dealing with conflicts of interest of members and former members of the Commission are in no way adequate to enable our institution to manage such cases, which have a devastating effect on the credibility of our institution.

This concerns, in particular, the role attributed to the Ad Hoc Ethics Committee, which seems to consistently confuse its mandate with that of a true judicial body, moreover, merely deliberating on the documents transmitted by the concerned members of the College. This is all the more inadequate considering the fact that the Commission keeps on simply and systematically following the opinions given by the Ad Hoc Ethics Committee and thus renounces to invoke Article 245 of the Treaty.

Once again, we can only confirm the need to thoroughly reform the enforcement mechanism for the management of the conflicts of interest of members and former members of the Commission and to carry out ‘till the very end the cases about them; this is what the “last chance Commission” must do to start regaining the confidence of citizens and meeting the expectations of its staff.

Everybody together for the European project

Approval of the New Commission – Letter to Barroso