Dissemination of the results from the 2018 Staff Survey:

Thank you, Commissioner Oettinger, for having accepted ALL our requests and for putting an end to the charade!

Recall of the facts:

In our communications (12 April, 1 April) we denounced the more than caricatural management of the ongoing communication of the results of the 2018 Staff Sur­vey.

Indeed, the staff and its representatives were stunned by this parody of a beauty contest organized to “sell” the positive results while showing the greatest “discretion” about the critics.

In these circumstances, as DG HR is obviously unable to coordinate any of these activities, we requested from Commissioner Oettinger to ensure the publishing of the detailed results at the level of the institution, each Directorate-General and Service, as well as the comparison of these results with those obtained from the previous exer­cises. And we announced that we hoped to avoid making a formal request for access to these documents in line with Regulation 1049 …

We would like to thank Commissioner Oettinger very sincerely. At his meeting on 30 April with the unions, he accepted all our requests, by ensu­ring a finally worthy and credible management of this exercise!

R&D does not put all services in the same boat!

Nevertheless, it is reassuring to note that despite the glaring lack of coordination of DG HR, despite the obvious lack of a communication strategy at the level of the institution, se­veral DGs and Agencies have been perfectly able to ensure reasonable management and, in some cases, even exemplary dissemination of these results.

BRAVO to DEVCO, JRC*, EASME* , RTD, EMPL, REA, REGIO, NEAR, BUDG, PMO, ERCEA* ….for having published all the results also by Directorate … while other DGs and Agencies showed lack of transparency.

Mr Oettinger having “stopped the sellout” organized for the distribution of these results, it is time to celebrate the winner of the first edition of the inter­national prize that we organized ( read )

In particular, by our communication of 1 April we announced that this European Grand Prix would have been awarded by a committee of specialists “in propaganda” to reward “the maximum difference that a DG or Agency will have been able to produce between the reality of the negative results highlighted by colleagues and the presenta­tion, especially reassuring, that would be made of those results! “

And we said that the winner would have been officially named the best “James” who tried to reassure the Marquise!

Congratulations to Mr Carlini, the new Director of EACEA, who, after being elected winner of the stage, unanimously wins the first edition of this prize!

The evaluation committee insisted on a scientific and impossible to ascertain approach, propaganda being an exact science as everyone knows.

In order to have an undeniable comparative analysis of the results, it used the graphic presentation as a constellation elaborated by DG HR – which seemed finally to remember its coordination responsibilities – showing the gaps … while having anonymized the results (sic!) paying tribute to the principle of transparency…

Nevertheless, the R&D intelligence service has decrypted the graph attached and we are able to confirm that the “planet” EACEA is indeed the blue one … deep down in the graph …

Through its graphic presentation, DG HR demonstrates better than any scholarly analysis the extent of the problems observed and the extent of the discomfort that these col­leagues wanted to manifest above all with regard to their hierarchy. 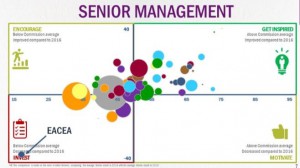 Having thus taken note of the results of the Staff Survey for EACEA (lire) and their relative position in relation to those of the rest of the institution, the Committee analysed in de­tail the two communications disseminated in this respect by the new Director of EACEA on 14 March and 24 April, and decided unanimously to declare the new Director of the EACEA the stage and final winner of the of this prize with the following motivation:

I.          By keeping a cool head while being aware of the results of the 2018 Staff Survey for this Agency which are by far and for several aspects the WORST of our institution and are overwhelming concerning the appreciation of senior management with around 90% (sic!) of critical responses, nearly 40% below the Commission average, with only 10% of EACEA staff believing that changes are well managed within this Agency;

II.         By being able to keep calm and engage in a memorable “synthesis exercise” by publishing on 14 March… a small page “summarizing” the results, namely the most succinct communication, compared to all the other services of our institution, and by presenting these results as “challenges”;

III.       By demonstrating an extraordinary resilience by resisting for 40 days the impulse to respond favourably to our request to ensure greater transparency and to follow the very bad example of other DGs and Agencies which have published the complete results from the outset;

IV.        By publishing FINALLY on 24 April the results, naturally without the details by Department, by FINALLY fully displaying their disastrous dimension, without in any way accompanying them by any thorough analysis;

VI.     By demonstrating the most striking mark of “fellowship” between managers, as the new director of EACEA; having just been appointed, is not responsible for these re­sults.

In view of the above, the committee decided to close the evaluation procedure and to award the prize to the new Director of EACEA, without analysing the other applications.

Indeed, all the propaganda specialists and the authors of “La Vie en Rose” consulted in this regard, confirmed that it was simply impossible for any other candidate to put in place a communication strategy that would ensure an even bigger gap between the reality of the disastrous results from the Staff Survey and their especially reassuring presentation!

R&D alongside and in defence of EACEA staff

In response to the gestures of those who pretend not to understand the scope of our criticisms, R&D is still paying tribute to the EACEA staff who, as the results of the Staff Survey confirm, was still able to keep its motivation and its pride while being confronted for too long with absolutely inadequate management and supervision, being called upon to overcome very serious dysfunctions as confirmed by the various audit reports and of which the management of this Agency was solely responsible.

We would like to thank in particular the EACEA colleagues for the support addressed to R&D and for the encouragement to continue our actions (read the note R&D is listening to the staff of EACEA, Note to the at­tention of Mr Carlini), asking the supervisory DGs to intervene in order to obtain a real change in the functioning of this Agency.

Thus, we are looking forward to receiving all the results, including the breakdown according to the categories AD, AST, AC, as well as the requested comparative ana­lyses that we will not fail to study in depth with the help of external specialists, with a view to presenting our suggestions and to discuss them with the administra­tion. In this context, we also request access to the comments, especially since some of them were especially worrying as those mentioned in our note for the atten­tion of Mr Oettinger (read).

We must make sure that we never again witness the painful masquerade organized so far in communicating the results of the 2018 Staff Survey, of which EACEA’s case repre­sents the apotheosis that will remain forever in the annals.

The Staff Survey must become a fundamental tool of the staff policy of our institution and must be used in a credible framework and, above all, established in a clear way once and for all.

For this, it is not enough to constantly engage in empty slogans but there must be effective coordination of the exercise at the level of the institution, something that DG HR has obviously not been able to guarantee hitherto,

In addition, a number of conditions must always be met, starting with:

· the wording of the questions so as not to influence or suggest the answers;

· the full publication of the detailed results at the level of each functional unit and not a single overall average that does not give a true picture;

· comparing the results with those obtained in previous years;

· the effective and targeted taking into account of the results on the specific problems observed.

* R&D would like to highlight the extensive and transparent analyses published by EASME, JRC and ERCEA