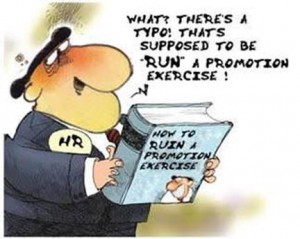 Does however everything work well? Although the recent Staff Survey does not answer it directly (and for good reason since the question is not judiciously asked …), the more than 1,000 appeals introduced during this exercise make it doubtful. Will DG HR analyze the results of this exercise, inform the staff and identify opportunities for improvement? On the basis of previous exercises, we can surely doubt it! R&D therefore delivers its first analysis on the major issues that require corrective action as of next exercise.

The yo-yo game of calculating quotas :

Do you think that your merits are the criterion that will decide your promotion? False! Your chances (this is the exact word to use) of being promoted depend primarily on this quota calculation. Your grade is largely endowed with quotas for promotions: you are likely to be promoted! And even to be promoted faster than the average speed expected in your grade. Conversely, if your grade receives few promotions, you will have to wait another year, even if your evaluations are very positive.

The proof with grade AD10: the graph below illustrates the difference between the quotas allocated in this grade and the number of AD10 colleagues having reached (or exceeded) the seniority expected before promotion in the grade: 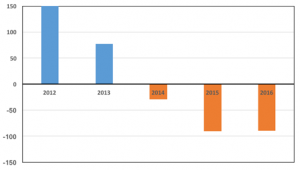 In 2012, quotas far exceeded the number of officials who have reached seniority. The result: 88% of colleagues promoted that year got a fast promotion and only 10 colleagues with 4 years of seniority were not promoted.

Were AD10 colleagues promoted in 2012 much more “performing” than our AD10 colleagues in 2016? It can be doubted, unless the change to 40 hours has caused their productivity to fall sharply…

This demonstration can (unfortunately) be extended to other grades: your merits are not linked to a slow or fast promotion. Is it a fatality? No. It would be sufficient for DG HR to take into account the distribution of the seniorities in the grades in order to refine this calculation of quotas: if necessary, our ESTAT colleagues could provide the necessary assistance…

The distribution of quotas between DGs :

The quota of promotions in your grade is low? You still have a … chance to get your promotion. Indeed, a second important parameter will determine the possibility of being promoted: the distribution of these quotas between DGs.

In this little game, some DGs do better than others, depending on the distribution of seniority in the grades. R&D had previously published an analysis on the 2015 exercise (link). The graph below illustrates the loss / gain of promotions in 2016 due to the current distribution, compared to a distribution taking into account the seniority in the different grades in the DGs. 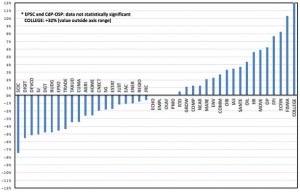 Unfortunately, one exercise is not there to catch up with another: DIGIT, SJ, CICS, are still among the losers in 2016 exercise.

Once again, your (non-) promotion will depend on a parameter unrelated to your merits. Again, taking into account seniority in the grades would remedy this inequality.

The (voluntary?) error of seniority for entry grades :

DG HR indicates the average seniority before promotion in each grade (link): they are simply calculated according to the promotion rates defined in the Staff Regulations.

Let us take the example of grades AST1 and AST2: the promotion rates for each of these grades are identical and equal to 33 %. According to the formula used by DG HR, the number of promotions in 2016 will be equal to 33 % of the active population on 1 January 2015: 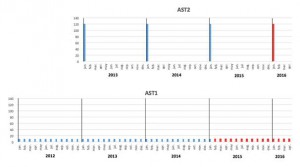 Similarly, the quotas calculated by DG HR in grade AD5 make it possible, on average, to promote colleagues having six months more than announced. In reality, the DGs use the cascade system to correct DG HR’s error and thus allow promotion after 3 years in these entry grades. But this operation is not neutral and takes place at the expense of the higher grades.

The solution? Adjust the quotas for these entry grades so that they really correspond to the seniority value displayed … or DG HR must have the courage to indicate that the average seniority of these grades are 6 months higher than those which are currently displayed.

The promotion exercise can only gain in credibility with the corrections suggested above: the painful impression / reality of “lottery” left by previous exercises can not become the feeling that prevails at the launch of the exercise. R&D  will continue to inform you in the coming weeks about the other highlights of the promotion / reclassification / senior expert-assistant 2016 exercises.