This report of the Court of Auditors confirms in all respects the critical analyses that R&D and the Com­mon Front of trade unions have defended throughout the process of adopting the Reform:

“Big savings” at the expense of the staff

R&D welcomes the audit work carried out by the Court of Auditors on the consequences of the 2014 reform for the staff of the European Commission and underlines the scope of the analyses and conclusions, which tie in with our statements and positions.

The situation is serious and worrying. More than ever, it is necessary to mobilize in order to defend the European civil ser­vice.

R&D urges the new Commission to realise the need to act as soon as possible in the face of a critical and deleterious situa­tion. 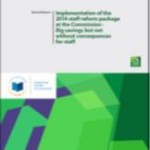 More Catholic than the Pope!

The 2014 reform has brought substantial savings to the European budget (€ 4.2 billion over the 2014-2020 period), with staff reductions of 5%, freeze on salaries and pensions and a re­vision of the Staff Regulations. The Court of Auditors recognises that these savings go beyond the amounts initially agreed: 55% more savings compared to what has been “required” by the Staff Members! In the long term, they will increase further due to changes in the retirement age, the career structure, the blocking of careers of administra­tors and the peril on our pension scheme.

At the time, despite its commitments, the Commission proved incapable of restraining the eagerness of the Member States to go beyond its reform proposals and, during the negotiations, under the pretext of always saving more money, the bidding at the expense of the staff has begun.

The emptiness of the Commission’s promises to defend its proposal …

As in the even more disastrous Reform 2004, the report of the Court of Auditors once again demonstrates the emptiness of the promises of the Commission to control the procedure of adoption of the statutory amendments through a “credible and limited” proposal that it solemnly undertakes to defend before the Council and the EP so that it is not made worse, or even to withdraw it if it were distorted!

Don’t fool yourselves: there are no tiny reforms, limited reforms or surgical reforms!

The results of the last two Reforms show that the Commission has neither the genuine will nor the political capacity to master the adoption process of a Staff Regulations reform. And its proposal systemically comes out diverted and aggravated by Member States increasingly greedy for savings, especially when those can be made at the ex­pense of the staff of the institutions, all categories combined, that they stigmatize as much as they envy!

This is confirmed by the Commission’s replies published in the abovementioned report. In particular, the Commission acknowledges that it cannot make an impact as­sessment prior to submitting a proposal to amend the Staff Regulations and that it has no control over the reform procedure, by confirming that it is entirely in the hands of the co-legislators.

In these circumstances, R&D hopes that from now on everyone has finally understood that it is irresponsible to engage in “tiny reform” proposals aiming at “surgical and con­trolled” modifications of our Staff Regulations only limited to the aspects that would be covered by the proposal. This is giving a stick to be beaten with.

The negotiations notably with the Council resemble more a “social butchery” than a robotic microsurgery theatre!

Indeed, as confirmed by the case law, once a reform proposal is made, the Commission effectively loses control of the process; the co-legislators are in no way restrained by the original proposal and can modify it with the greed they are known for.

In particular, once the Commission makes the proposal, our Staff Regulations are in the hands of the co-legislators who are legally free to:

– not only make worse the proposal of the Commission in all aspects that are covered by it,

– but also add many other aspects that, as in 2014, are not covered by the original proposal,

– or even include measures that are expressly excluded by the Commission on the basis of a detailed motivation justifying their non-inclusion in the proposal.

In short, when the Commission decides to open the Staff Regulations for tiny reforms it knows perfectly well that it puts the finger in the infernal gear, which will certainly devour the finger, the hand and the arm … of the staff!

As the Court of Auditors confirms, the short-term vision of the Member States during the negotiation of the 2014 reform is disastrous as regards its consequences:

– ageing of the workforce (the average age of the staff is 48 years and increases by 6 months each year),

– job insecurity with massive and increasing use of contract agents and long-term impact on the knowledge management and the business continuity,

– increasingly unfavourable conditions of employment, with the “burn out” but also the “bore-out”,

– net and continuous decrease in the purchasing power since 2003, while other national civil services have seen their purchasing power corrected upwards, which is mea­sured by the absence of certain nationalities in EPSO competitions,

– decreased leave rights, in particular in the delegations of the European Union,

The final result: reduced attractiveness of our civil service!

All this, as the Commission acknowledges belatedly in its communication of “Shaping the Future of Europe: Attracting, Retaining and Developing the Best Talents to Work in the Euro­pean Public Administration” (link), has had the effect of reducing the attractiveness of the European Union as an employer at a time when it is already struggling to attract sufficient staff from a number of Member States. This results in long-lasting and significant geographical imbalances. To this end, the Alliance, of which R&D is a member, has supported this initia­tive to restore the attractiveness of the European civil service while making reservations and proposing solutions (link).

In addition, the increase in daily work pressure has created specific problems that could lead to burn-outs as well as harassment situations. The Court of Accounts also observes more and more absences due to sick leave.

Not to mention the retirement age of 66, which is among the highest in the EU.

As confirmed by the Court of Auditors, the Commission is less and less perceived as an organization that cares about the well-being of its staff!

And what about staff satisfaction? The Court of Auditors recognizes that the Commission is less and less perceived as an organization that cares about the well-being of its staff and that there are growing concerns about the workload.

Too much focused on petty accounting and financial aspects, the Commission refuses to detect and correct the negative effects of the successive reforms it has brought about with a false political naivety.

Increased politicization of the civil service

While the Commission is the guardian of our Staff Regulations, it nevertheless seems to want to further weaken the principles on which it is based. Thus, it instrumentalises it in favour of its growing politicization, notably in terms of recruitment and appointment, and this especially for the benefit of cabinet members, giving rise to critics from colleagues, supervisory bodies, other institutions, the press and citizens

It is time to open our eyes

R&D maintains its positions! R&D has denounced blatant situations of dissatisfaction and recurring problems (staff surveys, alarming situation in agencies …), fight against harassment whose existence in the institution is, however, absolutely not recognized (almost no case detected and punished by the administration!), failure to take into account the opinion of the staff in the choice of a number of Directors General to impose open space (except for themselves, obviously)…

All this gives rise to a confidence crisis that must be ended by concrete and visible acts and not empty slogans in defending the indefensible.

So many files on the table that urgently require a new approach. It will be the action that R&D, on the basis of this report of the Court of Auditors justified by figures, will undertake with the new Commission. Whether it likes it or not.