2018 promotion exercise… back to the lottery!

The evaluation exercise has begun with the self-assessments and we are now in the dialogue phase with the evaluators. Although these dialogues are intended to assess your performance in 2017, it is quite normal for you to also raise the question about your chances of getting a promotion this year: your line manager cannot however deeply clarify the issue given that s/he totally ignores whether or not your DG will be granted promotion quotas.

R&D hereafter provides you with some essential information.

First of all, a brief summary of the exercise that ended in November 2017: R & D has always denounced what is probably the biggest problem of this exercise: the system of distribution of promotion quotas among Directorates-General.

Therefore, your chances of getting a promotion depend a lot on this distribution and… way less on your merits.

We have proposed (link), and will continue to propose, major changes to put an end to this lottery, which has already lasted too long, and in order to restore the trust of colleagues towards this exercise.

Actually, because of the procedure invented by DG HR for the distribution of quotas, the “EuroMillions lottery promotion exercise” is very often uncertain and unpredictable, and this results in blatant differences between Directorates-General, without the slightest connection or consideration for the merits of colleagues assigned to them.

In particular, the graph below indisputably illustrates the surplus of quotas received in relation to the number of officials who have attained the average permanence of their grade. 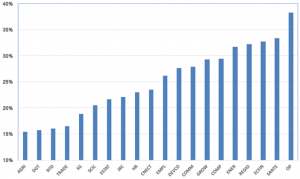 While DGs AGRI, DGT, RTD, TRADE and the Secretariat-General have the possibility to propose only 20% of their staff for a rapid promotion, DG OP can propose twice this amount!

Did the respective Directors-General, J.B. Plewa, R. Martikonis, R.J. Smits, J.-L. Demarty or A.  Italianer, express concern about this situation and inform DG HR about the discontent of their staff? Of course not, because DG HR is careful not to provide them with these figures!

The perverse effect of this imbalance is that, under these conditions, and in order to ensure a rapid career rate comparable to that of other services, DGs which are penalized by the distribution of quotas, tend to artificially delay the career of colleagues who already reached the average permanence, condemning them to a slow career that is in no way supported by any demerit on their part!

As demonstrated by the graph, within other DGs, the fast careers can be serenely guaranteed without the slightest need to delay the average advancement of anyone. The situation is so absurd that sometimes the DGs report that they are obliged to offer very fast career to colleagues in certain grades because of the quota surplus, and to be equally obliged to delay the career of very deserving colleagues in other grades because there are not enough quotas!

And all this happens without these proposals resulting from a real comparative analysis of the merits of the colleagues concerned.

The 2018 promotion exercise: as every year, R & D provides you with its forecasts for the distribution of promotion quotas by grade and by DG.

We are aware that both colleagues and service managers are constantly asking for the R & D forecasts for DG quotas in each grade and even look forward to receiving them.

We are also honoured that these forecasts have become an essential working tool for both the evaluators – who have even told us to be waiting for this information before starting the dialogues – and for those in charge of human resources management who, within each DG, have to coordinate the promotion exercise.

We confirm our commitment to keep on doing everything possible to ensure that this promotion lottery ends and that the promotion exercise becomes credible, fair and transparent again.

And actually, if DG HR does not decide to modify its formula, as it has unfortunately been the case for several years, R & D can nevertheless now provide you with the estimation of the quotas that will be allocated to your Directorate-General for the new 2018 exercise. 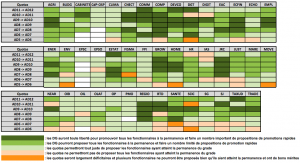 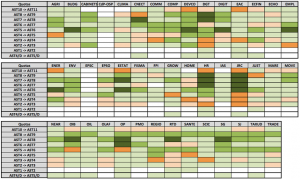 Certification exercise 2014: DG HR services finally talk and common sense is finally back among us!