Note to the attention of

and Karmenu VELLA, Commissioner for Environment 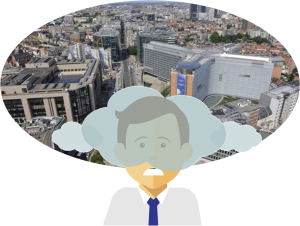 Subject: Poor air quality in the heart of the European quarter – Study confirms what R&D says

In November 2016 (link), R&D had already denounced the failure of the Belgian State to meet its responsibilities for ambient air quality and clean air for Europe, and more specifically regarding the Brussels area.

To this end, the Commission put Belgium on notice (infringement No 2016/2005) for non-compliance with Directive 2008/50 / EC of 21 May 2008, in particular for the non-sampling of concentrations of nitrogen dioxide (NO2) in areas where they are the highest.

According to recent measurements, alarming levels of nitrogen dioxide (NO2) have been detected in the heart of the European quarter

Our position was confirmed by the NGO ClientEarth which carried out measurements from 19 February to 20 March 2017 in the heart of the European quarter : rue de la Loi, rue Belliard and avenue des Arts.

The results of the analyses, disclosed by the press (link), show alarming rates of NO2 in the quarter. The observed values (from 69.22 to 99.44 micrograms per m3) are well above the limit not to be exceeded on an annual average which is set at 40 micrograms since 2010.

The health of citizens and colleagues endangered!

Nitrogen dioxide comes from the emission of gases from diesel engines. It causes respiratory problems, through lung walls inflammation and can lead to hospitalization or even death.

An impact assessment by the Commission (SWD (2013) 531) points out the possible serious health risks.

“Without urgent action at local, national and EU level, people working in the heart of the European quarter will be breathing toxic and illegal levels of pollution into the next decade,” said Alan Andrews, a lawyer with NGO ClientEarth. “By failing to report data from Brussels’ most polluted roads, the Belgian government is hiding the true scale of the city’s air pollution problem from both the Commission, and perhaps more importantly, the public. We have a right to breathe clean air and the right to know when our governments are failing to protect us.”

The EU, which is very sensitive to the effects of these gases on citizens’ health, has adopted a new Directive on National Emission Ceilings (NEC Directive) with a view to drastically reducing air pollution. It entered into force on 31 December 2016 (link).

On this occasion, Karmenu VELLA, Commissioner for the Environment, Fisheries and Maritime Affairs, said: “The new European air quality rules are a significant landmark in the fight against this invisible killer that is air pollution. Air pollution kills over 450 000 people in Europe each year. This is more than ten times as many as road traffic accidents”

Given the above, and always eager to protect the health of our staff, R&D is calling for your joint intervention as Human Resources and Environment Commissioners so that concrete and rapid measures can be implemented in order to limit the irreversible damage to human health, caused by the toxic gases emission.

In addition, R&D is asking the Commission to put in place all necessary measures to ensure that the Belgian State fulfils its obligations and, where appropriate, be subject to appropriate sanctions.

R&D also wishes to recall the European standard EN 13779, which clearly specifies the required filter performance in a system to achieve good Indoor Air Quality (IAQ) taking into consideration the outdoor air, and reiterates its request to OIB to monitor the ambient air in our buildings, and to regularly check and maintain in the most rigorous way the air filtering system, so that the most demanding standards are met.

As all experts indicate / recommend, it is essential for the pipes to be regularly cleaned and disinfected and for the air filters allowing the filtration of external and internal pollutants to always be replaced at their established deadline, i.e. twice a year for optimum efficiency.

Given the sensitivity of the issue relating to the health of thousands of people, we hope to receive a prompt response from you by launching appropriate procedures as soon as possible.

The right to postpone annual leave in case of illness

Towards Unity between Unions? A first timid step has been taken?