According to the Chinese calendar, 2017 should witness the pursuit of progress, honour and integrity … what is fervently desired by R&D !

The start of the year goes hand in hand with the launch of the evaluation exercises for officials and contract agents. You may have asked about your promotion / reclassification possibilities during the dialogue: your evaluator may have provided you with very little guidance, given the blackout  which DG HR has imposed on us for a long time. Following the many requests received recently and in line with our policy on  transparency , R&D therefore provides some essential information according to your astrological sign.

– You are an official

R&D never ceased to denounce what constitutes the biggest shortcoming of this exercise: the system of distribution of promotion quotas between DGs. Your chances of promotion depend very much on this distribution and … a bit on your merits. We have proposed ( link ) and will continue to propose profound changes in order to restore the confidence of the colleagues in this exercise.

According to the information in our possession, we should not expect something new for this exercise, and we can therefore provide an estimation of the quotas that will be allocated to your DG for 2017. 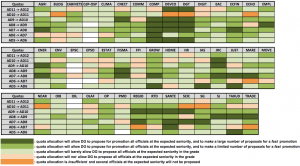 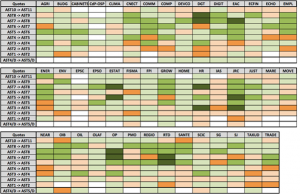 It will be noted in this patchwork that AST1 will suffer, as last year, from a chronic shortage of quotas: quotas in this grade are calculated on the basis of an average seniority of 3.5 years whereas DG HR says that this calculation is made on the basis of a 3-year seniority … which R&D has denounced in a recent message ( link )

R&D therefore reiterates its proposals: a distribution of quotas that ensures equal treatment regardless of a person’s DG, and a calculation of quotas for entry grades that ensures that 85 % of those in these grades can be promoted once they have reached the foreseen seniority (according to the “Sefcovic” safeguards). All hope is not lost: it took almost 3 years of leaflets, messages and meetings for DG HR to make some corrections to the quotas resulting from the formula, in a homeopathic dose. It is hoped that these “on demand” corrections will result in a revision of the quota distribution method.

– You are a contract agent 3a with a permanent contract

Unlike the promotion exercise, quotas are calculated here (and distributed) according to the number of contract agents who have reached the average of the foreseen seniority range in the grade ( link ): DGs therefore receive reclassification possibilities which correspond to the population with legitimate expectations for reclassification. Although these quotas are distributed by function group (GFI – GFII – GFIII – GFIV) and not by grade, DGs make proposals for reclassification in line with the expected seniority provided for by the GIP. All DGs? Unfortunately not…

Whereas DG HR asks DGs to consider 3-year seniority for a reclassification in entry grades (GFI1 – GFII4 – GFIII8 – GFIV13), some DGs do not follow this recommendation, basing themselves on fallacious arguments: “He has just got his permanent contract”, “She has less responsibility than her colleague GFI2”, etc. It should be noted that these (false) arguments are concentrated in the DGs where the exercise is delegated to a Deputy Director / Director-General whose experience in these exercises is often not as complete as that of a Director-General.

R&D will pay close attention to the DGs that have not complied with the DG HR note, and especially to … DG HR: it is not reasonable for colleagues with very good merits to appeal to the Joint Committee to obtain a reclassification. 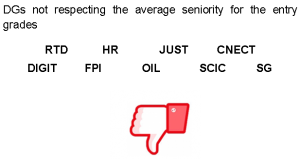 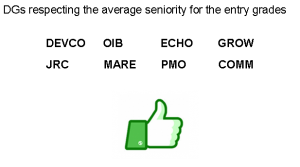 – You are an official not concerned by the promotion exercise …

… since the 2014 reform of the Staff Regulations, because you have reached grades AST9 / AD12 / AD13. However, you still have the possibility to change grade following a nomination to a Senior Assistant (SA) / Senior Expert (SE) position. These nominations are limited by the percentages defined in the Staff Regulations (8% for SA, 15% for SE). These percentages were respected in 2015. However,, without explanation, the SE quotas were more than halved last year!

… and you are thinking (or you are forced) to change DG: your responsibilities and merits will be recognized and your (rapid) career will develop smoothly up to grade AD12, regardless of your DG. However, beyond this grade, and especially for your last promotion, some Directors-General took the decision not to reallocate the promotion quotas they received and to cascade them to lower grades: this is the case with DG CONNECT for several years.

The reason most often mentioned is the lack of quotas for entry grades: instead of cascading these quotas and denying the responsibilities of Heads of Unit, these DGs should rather concentrate their efforts and ask DG HR to allocate sufficient quotas in the entry grades so younger colleagues could be promoted with a seniority in line with what is expected according to the Staff Regulations.

What are the DGs that will allow you to reach the end of career grade?

Time running out for final appeal on Promotions 2011