Note to the attention of

Subject:        “Parachuting” of Cabinet members at the end of the College’s mandate

Our dossier on parachuting (link) 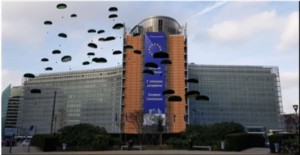 It was with great satisfaction that we read the statements of Mr Selmayr and Mr Italianer made during the meeting of the Heads of Cabinets of 30 January 2017 (see paragraph 7.12).

Indeed, it was confirmed that:

“Shall not be allowed:

In support of these instructions it was indicated that:

“These practices are demotivating for the rest of the staff who are not promoted with the same speed as the cabinet members”.

This was the clear position and instructions we had demanded for a very long time.

Nevertheless, we have noted that it was necessary to avoid at any price any perception that they were intended to make easier the cross-parachuting between cabinets, which was also inacceptable.

Furthermore, we have noted with regret that those instructions seemed to become less strict over time, omitting the members of the cabinets of the President and the Vice Presidents due to their horizontal responsibilities.

R&D reminds that it has always opposed the parachuting of Cabinet members at the end of the College’s mandate and has underlined the serious consequences for the image and the credibility of our institution and its appointment procedures as well as for the motivation of the staff.

In this connection it is undeniable that Barroso Commission overstepped all limits (see our dossier on this topic).

We must end once and for all the parachuting and the easy establishment of Cabinet members!

R&D has always demanded the introduction of clear rules forbidding, among others, the nomination of cabinet members.

Likewise, R&D has denounced the detestable practice of the “Geyser-parachuting”, namely the appointment of a cabinet member to a management position in a Directorate-General followed by an immediate reinstatement in a cabinet.

For a very long time the staff has witnessed with deep disappointment, not to say with a real disgust, such practices, acrobatic and delirious adjustment of organisational charts aiming at facilitating the safe landing of a designated parachutist … often with mimicry efforts within the framework of “the exchange of services” between cabinets …

In particular, all too often the “external” procedures organized under Article 29(2)* of the Staff Regulations are used for the benefit of “internal-external” candidates assigned to a cabinet, who are not eligible in the internal phase for the purpose of appointing TA 2c) or of appointing/promoting civil servant colleagues with the rise of several grades.

For R&D there has never been a question to cast doubt on the merits of our cabinet colleagues but, as the Ombudsman underlined, above all to defend the independence of the administration against political pressure.

As the European Ombudsman underlined, the problem goes beyond the mere protection of the interests of our staff:

“… it is urgent to avoid the politicization of our civil service, reassure citizens of its ability to defend the general interest and independence of political pressure and also to defend the legitimate career expectations of our staff as well as the transparency and credibility of our appointment procedures”

As Ms Grässle, president of CONT, rightly pointed out:

“(…) The big losers of these “parachuting” practices will therefore be the “normal” career civil servants with no political proximity (…) This is unfortunately true in the Commission, but also in the Parliament, whose talent to promote certain candidates to the detriment of rest of the civil service is no longer to prove. These practices lead to increasing frustration within the bureaucracy, which feels that careers depend more on arbitrariness than rationality.”

It is to be reminded that such practices discredit our institution and fuel Eurosceptic and Europhobe sentiments, even more toxic on the eve of the European Parliament elections.

… the deafening silence of DG HR

Whenever we have asked the administration to put an end to these slippages, denouncing the devastating effects of these practices on the credibility of our institution and the motivation of the staff, we have only received bureaucratic reactions denying any problem, ensuring that all appointment procedures had been put in place, implemented in the greatest transparency… that the rules in force were religiously respected by letter and spirit … in short, that all was fine in the best of all worlds!

What is worse, we also witnessed with regret that DG HR is not only incapable of putting an end to those practices but also that, as was the case with the organisation of “internal competitions” at the end of the College’s mandate, puts its talents and energy in such damaging manoeuvres.

For R&D, there has never been a question to cast doubt on the merits of the colleagues assigned to cabinets but to defend the independence and the credibility of our civil service, of our institution, its recruitment and appointment procedures and to take into account the devastating impact of such practices on the motivation of the rest of the staff.

It is completely understandable that every member of the College leaving our institution would like to thank his or her cabinet staff.

Nevertheless, as it was rightly pointed out in the statements mentioned above, one should not forget that those staff members have already been rewarded with quicker promotions as compared to the other staff.

Without forgetting the “tailor-made internal competitions” allowing the easy establishment of cabinet members, which DG HR, faithful to its mission of a linchpin, has already organised.

In any event, the gratitude of the college members towards their staff should in no way be expressed in “parachuting” or easy establishment, thus undermining the recruitment procedures of our institution and leading to further demotivation of the rest of the staff.

With 22 Commissioners who will probably not be part of the new College and our President who announced that he would not seek a second term, a real invasion of parachutists has already been organised!

Indeed, we learn that a number of posts which are vacant or are to become vacant ad hoc as well as new posts created through reorganisation have already been reserved for cabinet members.

What is worse, a number of appointments to management posts in the Directorate-General operating under the respective cabinet’s portfolio and placed under its direct supervision will be organised!

This is completely inacceptable and in flagrant contradiction to the statements mentioned above.

In light of the above, in view of your current responsibilities as the new Head of Cabinet of the President and the new Secretary-General, we ask you to take the necessary steps and give clear instructions to DG HR to put an end to the ongoing administrative manoeuvres aiming at deploying a whole range of parachuting appointments.

The Members of the College

Reform: agenda of the conciliation meeting on 16/11 with VP Sefcovic