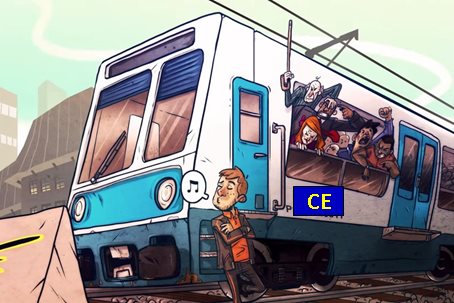 Too often the message of the Staff Representation is trivialized or downgraded by the Administration which claims to be at the forefront of modernity and accuses unions of not being able to modernize their analyses. In fact it is very often the institution that acts like a dinosaur that has missed the train regarding the results of scientific studies, and best practices….

R&D remains faithful to its commitment to do everything possible to ensure that the rights and expectations of staff are fully respected, and is not discouraged by these contemptuous attitudes.

In addition, R&D isn’t afraid to denounce the dysfunctions observed and systematically frames its analyses and policy positions in a wider context, also taking into account the best practices of the other institutions and the outside world, as well as the results of recent scientific analyses.

The Open-plan office saga is a striking example of this gap between the orientation of our institution and reality.

In our flyer of 21st January we denounced for the umpteenth time the umpteenth misconduct  – namely the imposition of a widespread implementation of open-plan offices in DG TAXUD which is advocated by the new Director General of the DG in cooperation with OIB, and that R&D proposes to rename “OIBP” (“Office Initiateur Bureaux Paysagers”)!

Today, « The Economist » (a newspaper and not “a dusty union flyer”) illustrates the results of university studies that rule in favour of R&D positions on the adverse effects of open space on quality of work, collaboration between colleagues and staff wellbeing. Accordingly, the Commission yet again finds itself promoting an outdated policy.

In particular, The Economist and scientific studies which are mentioned in the article ( Collaborative Overload Harvard Business Review, Deep Work: Rules for Focus,  American Psychological Association) confirm that the open-plan offices, far from constituting a modernization of work organization, do great damage to employees’ thinking ability, to their efficiency and thereby to that of the organization.

The following extract gives the tone of the whole article. We could have cited you others, but we leave you free to discover by yourselves:

« Talking to your colleagues can spark valuable insights. Mixing with people from different departments can be useful.

Helping people to colllaborate is a wonderful thing. Giving them the time to think is even better.»

These analyses are fully confirmed by the results of the investigation launched by the OIB to staff who “benefit” from open-plan offices in the building Philippe Le Bon. They confirm that that an overwhelming majority of colleagues (75%) deplored that after the establishment of open space it has become impossible to work without being interrupted and disturbed by noise and this greatly impedes their ability to concentrate. These results are even more important given the very heavy atmosphere in these services where zealous management seem to have started an ideological crusade on the development of open space.

Who is then the nostalgic and the dinosaur?

R&D – who bases its analysis on indisputable data and taking into account the results of external and internal investigations – or OIB(P) and heads of services who fell in love with open-plan offices unconditionally…?

Similarly, the question of the proper use of budget resources, increasingly reduced, arises. The excess of ideological zeal in favour of open space, and the increasing proliferation of tens of thousands of moves per year, raise questions also from the outside world.

Being always behind the times and completely cut off from external developments, it is urgent that the Commission retakes the leadership and behaves as an exemplary employer and that the well-being of staff – as well as the taking into account of its views expressed in a number of surveys – go beyond the stage of mere slogan to become in fact the first parameter to be respected in the decision-making process!