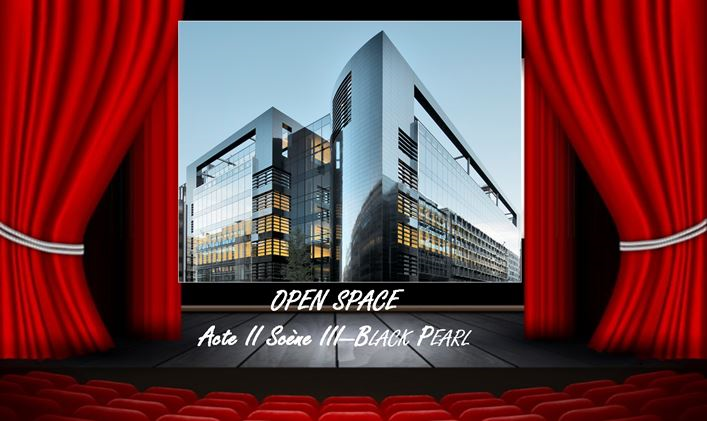 R&D has been closely following the case of the “Black Pearl” building since May 2015. Twice (Black Pearl 1 & 2), we had already identified the in­herent drifting in the realization of “Open Space”.

Today, the decision was taken, without prior consultation with staff, to place off all staff in Open Space offices.

After Act I Scene I of DG TAXUD, Act II Scene III DG DIGIT continues the “Open Space” Odyssey within the Commission!

What will be Act III?

The regulations (“Manuel des conditions d’hébergement—Partie 2” only in French version ) require that all decisions should be taken in the most transparent manner possible by involving the staff and all stakeholders, in order to achieve an effective solution.

This was not the case! The policy of “fait accompli” triumphed!

Indeed, if the Administration of DG DIGIT considers that its duty as an employer to consult its staff in order to protect their health and prevent psycho­social risks is accomplished by simply sharing minutes of meetings and making a short film, then we are facing a monolithic monologue! “

The vast majority of DG DIGIT staff is firmly opposed to this type of office which degrades their working conditions by challenging the effectiveness of services.

Amongst the scientifically recognized most harmful consequences of this type of office are: excessive noise, problems of light and temperature as well as a lack of privacy and excessive stress…

Without forgetting that excessive zeal is a heavy burden on the proper use of budget resources.

In this regard, R&D is pleased with the response  given by the Director General of  DG TAXUD to his staff  demands communicated by our leaflet of January 27, 2016 aiming at a stay of execution of the  hasty and ill-thought- out “Open Space” proposed by the OIB P (“Office Initiateur Bureaux Paysagers”).

The Director-General of DG TAXUD decided to give up for now in the transfer of its staff in the “Open Space” recognising that, as R&D had indicated, this project requires extensive discussions with the staff and  further reflection.  It is clear that the OIB P continues its destructive policy to break the morale of staff who are the “Crown Jewel” of the institution.

Why does a DG make such a mistake?

For a more realistic and less theoretical approach and in order to assess the extent of staff rejection of such practices, just remember the results of the staff survey organised by OIB for the Philippe Le Bon building. Unsurprisingly, the concerns expressed by colleagues wholly confirm the results of sci­entific studies (Collaborative Overload Harvard Business Review, Deep Work: Rules for Focus, American Psychological Association) published by “The Econo­mist”.

To make your voice heard, R&D is at your disposal to hear your views and your wishes. Your opinion counts!

Note to the attention of Mr Jean-Claude Juncker, President of the European Commission : “Bahamas Papers” and articles in the European press about the situation of the former Vice-President Neeli Kroes

Opinion of the Council Staff Committee on the EEAS Statutory changes