Note to the attention of Mr Italianer

Secretary-general of the Commission

Ref:            My note of 7 March to Mr Juncker concerning the decision of 28 February 2017 of the European Ombudsman to open an investigation inviting the Commission to reply to the letter of 16 October 2016  sent by the collective of staff members who initiated the petition “Not in our name” ( link ), but also to verify the management of this revolving doors case by our institution

Let me thank you for your abovementioned note.

On this occasion, you brought some clarifications about the management of the Barroso and Kroes cases.

In particular, you expressed the wish that these clarifications would reassure me as to the  proper management of these cases and the application of the measures taken.

Though I wish to thank you for your explanations, I regret to inform you that our fears have not been dispelled and that our perception of insufficiency in the action of our institution with regard to these files remains the same.

For this purpose, please find below our appreciation on an action that is far from being sufficient:

By informing us that the Commission has finally replied to the letters from the collective of staff members which initiated the petition ‘Not in our name’ concerning the Barroso case, you seem to forget that it took more than  5 months for this reply to be sent, despite several reminders and a formal invitation from the European Ombudsman to the Commission so that it finally agreed to reply to the thousands of staff members who signed the petition.

While thanking you once again for having met the delegation of this collective last October in a very formal framework, we continue to believe that it is sad to see that President Juncker could not, in turn, find time to meet with it, while the other institutions have shown far greater sensitivity and attention: when the petition was tabled, President Schulz had reserved for the delegation of this collective a very warm welcome and a very attentive listening, and the European Parliament subsequently adopted decisions which are in line with the petition.

Not to mention the attention and listening reserved by the European Ombudsman.

It is therefore undeniable that thousands of Commission staff who appealed to President Juncker and to our institution by expressing their trust have received more attention and listening from the other institutions than from ours.

Surely you will agree with me that this treatment is not what thousands of colleagues are entitled to expect from their institution.

About the indulgence of the ad hoc ethics committee, the limits of the audits carried out and the existence of a dual-speed ethic

Concerning the indulgence of the ad hoc ethics committee and the fact that there would not be a two-speed ethic between, on the one hand, the thorough investigations carried out by IDOC for the cases concerning staff members and, on the other hand, the extent of the thorough checks carried out by the ad hoc ethics committee for the former members of the College, I would merely cite the position taken by the European Ombudsman on the checks carried out within the framework of the Barroso case.

“I expected a much more thorough investigation. There is no evidence that they heard anyone, whether they asked to see Barroso’s contract at Goldman Sachs or whether they investigated the scope of the tasks entrusted to him. “

Not to mention that in its resolution of 1 December 2016 on the declarations of interest of the members of the Commission ( 2016/2080(INI) ), the European Parliament in turn highlighted the limits of the ad hoc ethics committee. It calls for its deep reform and in particular

“That it be composed of independent experts, draws up and publishes an annual report on its activities, which may include any recommendations on the improvement of the Code of Conduct or of its implementation as the ad hoc committee sees fit».

Concerning your claim regarding the merit of our institution to have strengthened last November the cooling off period for former members of the College, as soon as we read the interview of our President on 5 November 2016 to the newspaper Le Soir, announcing that his intentions would be going that way, we immediately welcomed this improvement.

However, we regret to note that these changes come more thanlate and are insufficient.

On the one hand, the lateness is part of the succession of unanswered denunciations, which preceded the Commission’s decision of 22 November 2016.

At that time, we found that the Commission appeared to be the only body in the world able to defend the exemplary or the even merely adequate nature of these rules.

And, as was easy to predict, this unfortunate position of the Commission was seen as a real provocation and gave rise to a very strong reaction from the European Parliament which, on 26 October 2016, decided to suspend the allowances received by former European Commissioners.

This decision, which was adopted by a very large majority – no group opposed or even abstained – was motivated in particular by the Commission’s refusal to change the code of conduct:

“The Parliament decides, in the light of recent revelations and in order to regain the confidence of EU citizens and the credibility of the EU institutions,  to hold 20% of appropriations of the Temporary Allowances for former Members in reserve until the Commission enforces a stricter Code of conduct for Commissioners to prevent conflict of interests and the revolving doors”

On 30 October 2016, in response to the opinion of the Ad hoc Ethics Committee in the Barroso case, the European Ombudsman had in turn challenged the Commission’s refusal to amend its Code of Good Conduct  while it was becoming absolutely obsolete.

Finally, on 23 November 2016, after all  decisions and positions taken by the European Parliament and the Ombudsman, as well as the various reactions of the press in all Member States, of the staff and their representatives, etc., the Commission decided to amend the Code of Conduct by limiting the period of mandatory notification to 2 years for all members of the College, and to 3 years for its former Presidents.

Under these circumstances, it is clear and indisputable that this decision came very late.

On the other hand, the insufficient scope of the changes introduced and of the implementing procedures in this field, in particular as regards the Ad hoc Ethics Committee, was largely confirmed by the European Parliament, by its resolution of 1 December 2016 ( 2016/2080(INI) ), also adopted by a very large majority.

On this occasion, the European Parliament pinned down all the limits of the Code of Conduct relating to financial declarations, the management of conflicts of interest of Commissioners, as well as those concerning the duration of the cooling off period.

The EP asked the Commission to “reform the Code of Conduct as soon as possible“, stipulating, inter alia:

“that the code of conduct be amended, in line with Article 245 TFEU, to extend Commissioners’ post-office employment restriction to a period of at least three years and not shorter than the length of time during which former Commissioners are eligible for a transitional allowance as defined in Regulation No 422/67/EEC “

“that the Commission reports on an annual basis on the implementation of the Code of Conduct for Commissioners and provides for complaint procedures and sanctions in the event not only of serious misconduct but also of infringements of requirements, especially as regards the declaration of financial interests”

Under these circumstances, the insufficient nature of the Commission’s decision to reform the Code of Conduct, as it is restricted solely to prolonging the cooling off period, is just as obvious and unquestionable. 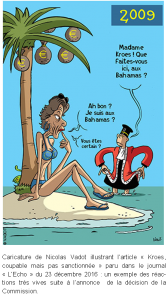 Regarding the management of Mrs Kroes’ personal situation, through your mail, you wish to remind me of her right to benefit from a careful examination of her case and a reasoned and proportionate decision.

We can only share these general principles, which must be the basis of any such decision, within any state governed under the rule of law.

It should nevertheless be borne in mind that this case concerned Mrs Kroes’ mandate as director of a company established in a tax haven, the existence of which was made public within the context of the Bahamas leaks, as well as the failure to declare to the Commission the income she had earned in 2015, while agreeing to still receive her transitional allowance, collected by the former Commissioners, within three years of their departure.

Mrs Kroes was not sanctioned for her undeclared mandate. She only got a reprimand for failing to declare her income.

In this respect, and in order to assess the proportionality of this decision and again the existence of a two-speed ethic, it is useless to speculate on the fate of any other staff member faced with those same allegations and, namely, whether it could have been laundered by the IDOC and / or the Appointing Authority by invoking, like Mrs Kroes did, the fact of keeping on being, unbeknown to herself, the manager of a company that is useless, on the other side of the world, in a tax haven!

However, if the management of this case was so perfect and the measures  announced in catimini on 22 December so credible and proportional, we do not see how Mr Pascal Durand, rapporteur of the text adopted by the European Parliament on 1 December 2016, on the declarations of interests of the members of the Commission, could have described them as “genuine bull shit” by denouncing that “commissioners do not realize how much they are deteriorating Europe’s image.”

Similarly, if the management of these cases had been so exemplary, we do not see why the European Ombudsman would have decided to open a formal inquiry into how our institution managed the revolving doors of our former President Barroso, as well as the remaining four cases giving rise to an opinion from the Ad hoc Ethics Committee.

In the light of the above, it is with deep regret that, despite the clarifications you have made, we must once again deplore the lethargic attitude of our institution, which, throughout the conduct of these cases, gave the impression of cultivating the illusion – both by its inaction and its obviously inadequate reactions – that these cases would fade away and this, despite all the solicitations of the staff and their representatives as well as the political reactions within all Member States.

Afterwards, we did welcome the first reactions and actions implemented. Nevertheless, they remain largely inadequate, insufficient and incomplete to cope with the seriousness of the credibility crisis that has hit our institution.

This behaviour has not failed to exacerbate the reactions of citizens, your staff, the press, and to provoke increasing firm and critical positions of the European Parliament as well as the repeated interventions of the European Ombudsman, whom we would like to pay tribute to for her listening of staff’s expectations and for the clarity of her positions.

It is this same clarity and  careful attention that your staff nevertheless continues to expect from the institution, which we have chosen to serve with enthusiasm and pride.

Again, when it comes to issues about the occupations of former members of the College at the end of their mandate, we would like to confirm that what is at stake is not only their more or less questionable  behaviours and their lack of political sensitivity, but also, and above all, the credibility of our institution as guardian of the general interests of European citizens, by demonstrating its ability to withstand all external pressures, especially from lobbyists.

Copies: Members of the College

Lower Wages for Officials, Contract Agents and Pensioners in 2010

Elections to the Brussels Staff Committee on June 2012