The President of the General Court of the European Union confirms all the validity of the legal analyzes developed by R&D and its advisers.

By accepting the  R&D – supported request it forces the Commission to suspend the compulsory retirement of a colleague who therefore can continue to work in our institution! 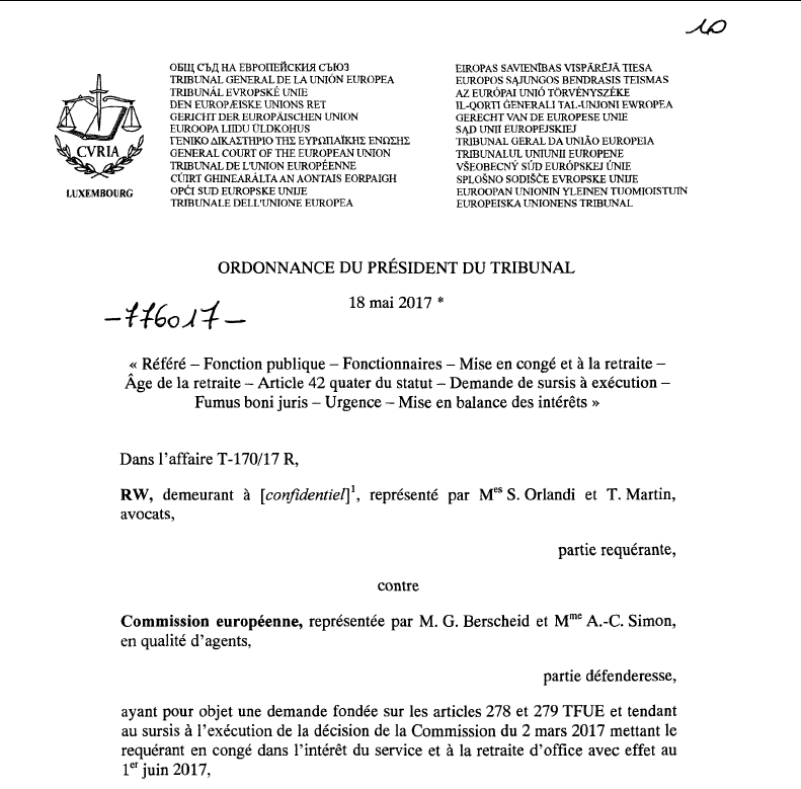 In our flier of 5 April concerning Article 42c of the Staff Regulations, we denounced the shameful and contemptuous management of this case by DG HR ( lien )

Today, the President of the General Court states that the application of the Staff Regulations has been infringed by DG HR, whereas its role is to ensure that that application is carried out correctly.

This is yet another proof of the dysfunction, arrogance and contempt that DG HR has shown for too long towards the staff and its representatives.

R&D is asking the Commission to draw all the consequences of the decision of the President of the General Court and to have it equally applied to the other colleagues in the same situation. is

R&D asks Commissioner Oettinger to take the necessary steps to restructure the action of our administration within a framework of respect for our colleagues and our Staff Regulations!

The “act of god” can no longer continue to be the sole source of right!

As early as October 2016, ( link ) alerted by several services on the intentions of DG HR concerning the application of Article 42c of the Staff Regulations, R&D had called for transparency, for the rights of colleagues to be respected and for the file to be  examined within the framework of the social dialogue …

At the outset, we pointed out the unacceptable discrepancies between the Commission’s approach and that of the other institutions.

To this end, we have drawn up a comparative table highlighting the gap between the application of these provisions by the Commission on the one hand, and by the Council and the EEAS on the other ( link ).

In particular, while the other institutions had publicised the procedure and had associated staff representatives with the treatment of individual cases, DG HR, in line with its consolidated practice, had based all decisions on the “fait du prince”.

In particular, we stressed that the issues involved in this procedure and the seriousness of the consequences for the colleagues concerned required first that detailed procedures should be drawn up in consultation with the staff representatives, in order to ensure the transparency and fairness of the decisions which could be adopted.

It is only in response to our determination to achieve clarity on this file that Mrs Souka finally confirmed by her note of 28 October 2016 ( link ) that the Commission intended to apply Article 42c; this without even deigning to reply to our request to re-examine this case within the framework of the social dialogue.

On 10 November 2016 ( link ), getting no response from DG HR to the abovementioned problems and seeing in particular the absence of involvement of staff representation in the process, R&D referred to Vice-President Georgieva.

On 13 December 2016, a social dialogue meeting was FINALLY organized, while letters of intent had already been sent to the colleagues selected for automatic dismissal, without any form of transparency whatsoever.

At the Social Dialogue meeting, we again denounced the fact that, unlike in other institutions, Article 42c of the Staff Regulations is implemented in the Commission without adopting any kind of decision that would be likely to regulate it, without any prior information or transparency as to the procedure for appointing the concerned colleagues, without any involvement of the staff representation and without duly informing colleagues of the consequences which might affect them.

Subsequently, we assisted and advised the colleagues who had called on us, also during meetings with DG HR services.

In particular, on the occasion of the meeting with the DG HR services concerning the colleague whose application for interim measures has just been accepted by the President of the General Court, we had indicated that it was absolutely unacceptable and contrary, with both the spirit and the letter of Staff Regulations, to apply Article 42c to colleagues who have already reached the minimum age for retirement but are still entitled to work for several more years.

We denounced the fact that, for DG HR, compulsory leave with all the accompanying measures set out in the Staff Regulations (payment of the allowance, possibility of making pension contributions, etc.) actually  is a synonym for compulsory retirement!

With the assertive and very haughty style which now seems to be its main manner of  of communication, the administration had replied to our objections by stating that they were unfounded and that we just had to read the Staff Regulations to realize that. In addition, DG HR informed us its interpretation of the Staff Regulations had anyway been validated by the Legal Service.

Faced with this unspeakable attitude of DG HR, referral to the court was the only possible option, which led R&D to engage in this action. That is how we stood alongside our colleagues who called on us.

In our  flier of 5 April 2017, we announced the lodging of an appeal and, without prejudice to the decision that might have been taken by the Court, we denounced the shameful management of DG HR (link ).

In its decision of last 18 May, the President of the General Court acknowledged the validity of the legal arguments that R&D had kept on submitting to DG HR, and decided to suspend the Commission’s decision, thus allowing our colleague to continue working within our institution.

The proceedings for interim measures before the President of the General Court are an exceptional procedure which is very rarely supported since the conditions imposed by Articles 278 and 279 of the Treaty are very restrictive.

Indeed, the acts of the institutions  benefit from a presumption of legality. It is therefore only in exceptional cases that the judge hearing the application for interim measures may order the suspension of the  execution of an act contested before the Court or order interim measures.

In particular, the President of the General Court confirms what R&D has never ceased to mention:

“It follows, at first sight, that, is not without foundation the applicant’s argument that Article 42c of the Staff Regulations does not allow to put an official who has reached the minimum retirement age, against his will, in leave in the interest of the service and simultaneously in compulsory retirement “.

“The Commission’s arguments are not such as to invalidate the conclusion that, at first sight, Article 42c of the Staff Regulations does not allow to put an official who has reached the minimum retirement age, against his will, in leave in the interest of the service and simultaneously, in compulsory retirement.”

A shameful and contemptuous management!

This decision by the President of the General Court demonstrates for the umpteenth time that it has become really intolerable, on the one hand, to hear a dual language promoting the staff of our institution – “first wealth of the Commission” – through videos and speeches, and, on the other hand, to see that some allow themselves to reserve such a contemptuous treatment to their colleagues after years of good and loyal service!

All this is not worthy of the institution we have chosen to serve with pride and enthusiasm!

Representations of the Commission: Double Standards