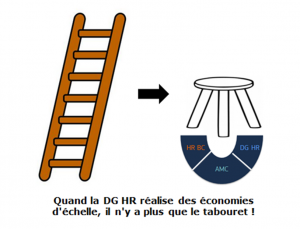 R&D has been denouncing the perverse logic and the disastrous effects of DGs’ silos, which have destroyed the team spirit amongst staff and the sense of belonging to the institution and to a single European civil service. R & D also denounced the arbitrary application of the Staff Regulations and its implementing rules with “The fact of the Director-General” who replaced the fact of the Prince and which sometimes became the only source of law. This, together with a DG HR unable to provide coordination and governance at the central level.

However, R&D has always reiterated the importance of the HR proximity mission in services, that is and remains essential.

Regarding the establishment of AMCs, through its positions on these issues (link) as well as during meetings with the DG HR, R&D emphasized that it was necessary to avoid that the improvisation of DG HR in the setting up of the policy of modernization and centralization of human resources, would plunge the management of this file into an unmanageable confusion by making the management of human resources quite “inhuman”.

Unfortunately, despite the promises and the fine words widely spread by DG HR, the staff can only see, on a daily basis, the failure of such management.

Nevertheless, this does not mean that R&D will accept that the staff discomfort and the mismanagement and improvisation that DG HR keeps demonstrating, can be used: finally guaranteeing a fair and transparent application of the Staff Regulations through all services of our institution and agencies, that is the claim that R&D will continue to defend with the utmost conviction.

No, everything is not all right… 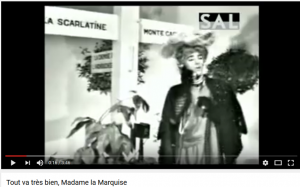 Faced with criticisms that R&D has echoed, true to its motto, DG HR continued to deny what could be and to trivialise what could no longer be.

We would like to believe that the decision to extend the pilot phase by six months, the centralization to DG HR of certain tasks, such as recruitment, hitherto performed by the AMCs with the aim of ensuring true mastery at central level,… tend to demonstrate that DG HR has finally given up pretending that everything is still going well, has finally realized the dysfunctions observed and is finally working to find the appropriate solutions.

The progress report of R&D

Nevertheless, despite their motivation and professionalism, many of the colleagues working in the AMCs, or as a BC (and also those who have used these services) feel helpless and called upon R&D by pointing us out the following difficulties.

Despite the efforts made, deep confusion continues to reign over this reform, which is being implemented by improvisation. You’ll find hereafter R&D ‘s detailed analysis.

No ticketing approach, according to DG HR, but colleagues who call on the AMCs observe every day that reality is very different

R&D has repeatedly pointed out that all new concepts and recent studies on an effective HR management emphasize the importance of human relation, which requires necessary qualities such as empathy, ability to listen and the maintaining of proximity services.

Following the specific requests made by R&D in this respect, DG HR committed to respond favourably.

Now, we are currently facing a double loss: on the one hand for colleagues assigned to the AMCs who have to process in line, anonymously and incessantly, dozens of files per day and, on the other hand, for “customers” who do not even have the possibility to have a personalized contact.

From now on, all queries are made by emails and via the functional boxes, which generates a very high number of daily requests to be processed by AMCs colleagues (sometimes up to 200 emails per day).

In response to R&D complaints challenging the trend to prohibit any telephone contact, DG HR has formally denied that this is a ticketing approach and confirmed that each message from the AMCs would henceforth mention the name of a colleague in charge of the file.

This is a step in the right direction but there is still a lot to do.

It is essential to avoid that mismanagement of PMO extends to AMCs which can not in any way become anonymous platforms such as call centres.

Glaring differences from one AMC to another

DG HR seems unable to ensure proper coordination between the different AMCs, while there are very significant gaps about the satisfaction levels of staff assigned to these different services, and from colleagues who use them.

There is an urgent need for an inventory of good practices in AMCs to improve the functioning of those which are obviously facing greater difficulties.

DG HR has always confirmed that throughout the pilot phase, colleagues were simply made available to the AMCs and that they would be reintegrated into their original DGs upon request. It is also based on this commitment that colleagues decided to take up the challenge and apply for the AMC.

However, the requests for reintegration into their original DGs from colleagues made available to AMCs do not always operate under acceptable conditions and sometimes they are inexplicably delayed under the pretext that DGs would not have available positions.

While it is understandable that colleagues who have applied for reintegration into their original DGs cannot return to their former tasks which in the meantime have been delegated to the AMC, to DG HR or to OIB, it is nevertheless important to put in place effective accompanying measures enabling them to devote themselves to their new missions.

Colleagues sometimes feel that they have become persona non grata in their original DGs and that they are perceived as a problem that DGs thought they had finally gotten rid of. This is unacceptable.

R&D requests that, like the pilot phase which has just been extended by 6 months, the deadline for requesting reintegration in the DGs of origin be extended as well

Indeed, while the pilot phase has been extended by six months, it is not acceptable that the deadline for ending the availability and, if necessary, requesting its reintegration into the DG of origin, be confirmed by 1 December 2017.

It should not be forgotten that colleagues made available to AMCs are called upon to make a very important decision with very serious consequences for the rest of their career.

Thus, it is not acceptable for them to be forced to decide urgently in a very volatile and still evolving context.

The role and missions of BCs within DGs continue to be anything but clear, in some cases with almost mystical outlines.

The skills of the colleagues designated for these missions are very varied and some of these appointments are surprising – to say the least – and seem to respond more to a logic of pure management of power on DG side, or to the need to find a job opportunity to some colleagues, than to respect the solemn commitments of the Commission to always put the right person in the right place.

On the one hand, under these conditions, it happens way too often that the colleagues who use the BCs do not receive a satisfactory answer and are simply sent back to the AMCs as if the role of the BCs was to return an out of office message indicating the telephone number to use in case of absence.

On the other hand, BCs are often overwhelmed with requests and demands for statistics from DG HR and are no longer able to fulfil the tasks assigned to them.

R&D at your service, always and forever:

Whether you work in an AMC or a BC or whether you are a user of these services, we invite you to contact us: please share with us your experiences, send us your requests, comments and suggestions.

We will ensure the confidentiality of your responses and take them into account, to constructively prepare the next meeting with DG HR officials, scheduled for 20 November 2017, to finally start solving the difficulties observed.

For R&D, under no circumstances should our colleagues, both in the AMCs and in the BCs, be designated accountable for these abuses, and we would like to pay tribute to their dedication!