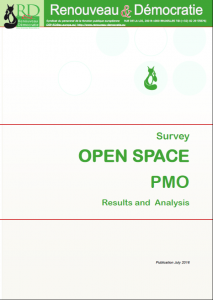 Since October 2010 (1), R&D singled out OIB for its irresponsible policy of setting up “Open Space” offices at any cost…

Already at that time, R&D denounced the drift of such a policy adopted by that Office despite the commitments made in 2007 by Mr. Chêne, Director General of DG HR and Mr Kallas, Vice-President, regarding the Manual of Standard Building specifications (MSB) (2).

The only purpose: to make budget savings on the back of colleagues without worrying about their welfare or working conditions!

We thought this intention had left aside, however it re-merged worse than ever with the ” hot desk” policy in 2014 (3).

Thus began the proliferation of open space offices. Some Directors-General will say “NO” and stop this momentum, while others let themselves be seduced.

R&D , always present, denounced any plans for these new office arrangements, which endanger the welfare of staff and do not in any way respect part 2 of the Housing Conditions Manual (HCM) (4).

Certainly, if some functions in certain services are more conducive to be made in open space, others, however, due to their specificities and specialties, need to be performed in a single office.

3 vice-presidents in charge of staff matters, Messrs. S. Kallas and Šef?ovi? and Mrs. K. Georgieva, acknowledged that, while continuing to meet budgetary constraints, the working environment and the well-being of staff should be and must remain a priority for the Commission.

We recognize that provision is made in the 2017 draft budget for a reduction of building space of 79,000 m2 by 2024 (from 822.000 m2 to 743.000m2), due in particular to the staff cut of 5%, the transfer of resources to the executive agencies, the non-renewal of certain building leases, the necessary renovations of buildings belonging to the institution …

However, this rationalisation of space needs to be considered and studied by analysing the situations case by case and providing optimal solutions for each department concerned.

In addition, new working time arrangements (teleworking, flexitime and part-time) cannot be an alibi to automatically and continuously worsen working conditions and reduce the office spaces of colleagues that benefit from them.

Despite scientific studies showing damaging effects of “Open Space” and “Hot Desk”, on staff health and efficiency of services, OIB persists and signs.

As the Housing Conditions Manual (HCM) imposes the necessity of  obtaining feedback from colleagues involved  before implementing any Open Space proposal, services have engaged in botched consultations, claiming later to have received  a favourable opinion from those colleagues.

This was the case regarding the PMO with a comic-cut presentation that will be remembered! (5)

Therefore, faithful to its commitment to be always attentive to colleagues, R&D decided to address Brussels PMO staff directly by launching a proper survey, guaranteeing the anonymity of responses and the reliability of results, in order to defend this file with arguments and comments of interested parties themselves.

285 colleagues responded to the survey, representing a total participation of 67% of PMO staff. This shows that this policy is felt deeply by the staff concerned, most of them Contract Agents at our service.

We conducted a detailed analysis of the results based on Commission’s reference texts. These results will be released without delay.

We especially thank all PMO colleagues who participated in this survey and we announce already that we will renew this exercise as many times as necessary, in other services that could be heading in the same situation.